A Celebration of Life

This is a week for celebrating the blessed life of my FIL. Wednesday morning he peacefully slipped from life on earth into his eternal life. He was fortunate enough to have been able to stay in his home and be surrounded by his family at the time of his passing.

To say it was expected would not be true. However, he lived longer than any of us ever expected that he would. He had celebrated his 90th birthday last November. His beloved wife of over 61 years passed away four years ago and I know he missed her until the moment of his death. Three years ago he suffered a stroke that had left him with a slight disability. Never a complaining man, he accepted his limitations and lived his life with dignity and class.

I was fortunate enough to be blessed with the most loving, wonderful set of in-laws that anyone could ever imagine. Being married to the eldest of the six sons, I was their first DIL. I was treated as though I was one of their own and I cherished my times spent with them.

They both had such a marvelous sense of humor. Their laughs were contagious. They enjoyed great music and they LOVED to dance. I have been at conventions with them where people would clear the dance floor to just watch them dance together. Unfortunately, they did not pass that trait on to their sons! 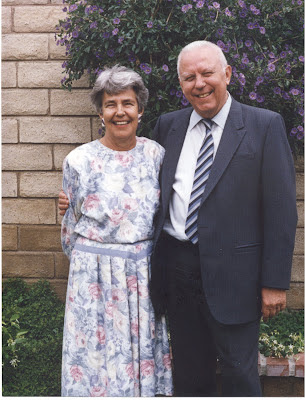 My in-laws were childhood sweethearts who married days before my FIL shipped off to South Africa with his army troop during the war. My MIL moved to NYC to live with a cousin while he was overseas. His return home was more than joyous and allowed them to travel by train to Los Angeles. Arriving on a glorious January day in 1945, they walked out of the train station to the smell of the citrus trees in bloom. The decision was made not to return to their hometown of Stillwater, Minnesota.

My FIL managed to get a job in the insurance industry and six sons arrived over the next twelve years. Business went well and he was able to open his own agency in the 1950s. Eventually all six sons joined the family business.

Eventually the sons married and the grandchildren arrived - 41 in all. The oldest grandson also joined the business. It was a great source of pride to my FIL to have been the start of it all. He was still going into the office as recently as last week. He did, however, refuse to allow a computer on his desk!

The years passed and 20 great grandchildren joined his family. His legacy will continue for many, many years.

He and my MIL loved their life together and a light went out when she passed away. He awoke each morning to her photo on his dresser and never failed to tell her "goodnight" before retiring at the end of the day.


Will we miss him? Oh yes, we will miss him like nothing else. It would be selfish to want him to stay with us forever when he has lived his whole life for this end. I know there is a celebration going on and I look forward to the time when we will all be joined once again.
Posted by Needled Mom at 4:02 PM