Wasn't there a song out about not trusting that day? Poor Wednesday as it has a bad reputation with names. "Over the hump day" is a prime example. What a shame it is to dislike what you are doing so much that you need a day to confirm that you are more than halfway through your week. Alas, today is Wednesday and I am looking forward to the day. I have some free time to work in my sewing room and do a little gardening.
Tomorrow is another story. It will be a day with much to do to prepare for Friday. The doctors have decided that the hip wound that my mother has been battling since last September is not going to close on its own. Therefore, plastic surgery will be done to close it from the inside out.

The recovery is going to be loooooong. The first two weeks she will stay absolutely flat. After that she will start on a strict regimen of sitting up for short periods. The schedule consists of "day 15 - sitting up for 5 minutes on one occasion" and "day 30 - sitting for 30 minutes on one occasion". Day 59 she will finally be able to sit for "3 hours on three occasions". Looking forward to that many days in a hospital is not a pleasant thought by any means, but we are hoping that this will be the end of it once and for all. So tomorrow will be all the pre-op visits for lab work, EKG, chest x-ray and a doctor appointment.
In more uplifting news, we had a delightful weekend with family. Four of our grandchildren spent the night with us on Saturday and we so enjoyed their visit. As busy as we have been lately, we haven't had a lot of free time to spend with the kids so this was great. 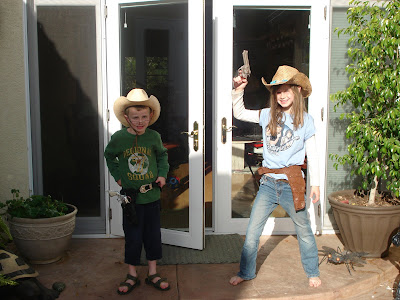 On Sunday one of our granddaughters made her First Communion and it was a time of celebration for all. Following that we all went to grab a hamburger at a local chain that is right by LAX airport. There is a large grassy area where you can spread a blanket out and watch the landing airplanes overhead while you enjoy your meal. It's a big guessing game as to what airlines will be landing as we watch their approach. 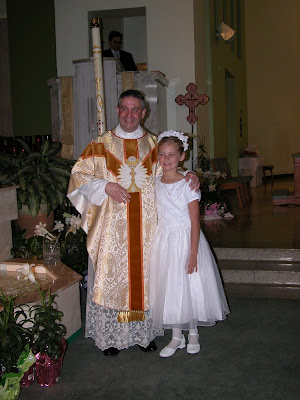 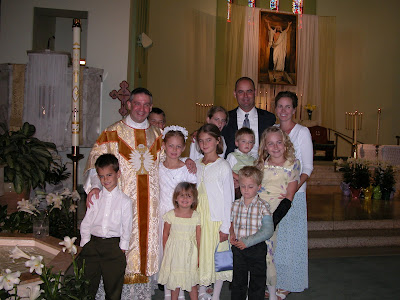 Ms. B and her family 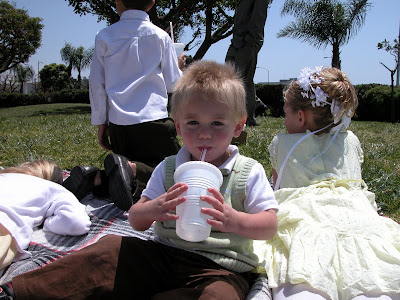 A nice day for a picnic.

I have also had a little time to work on a few more puzzle pieces. These things are addictive and I am having so much fun playing with them. I broke away from my muted colors and ventured into oranges. I actually think that I love the colored ones and may go off into different directions with that idea. I am excited to see what will be returned in the swap. 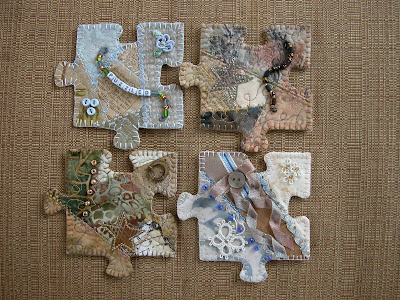 I hope that everyone is finally enjoying some decent spring weather after all of the cold many of you experienced this year. We have certainly enjoyed the spring flowers and the new hatchlings that have shown up in our yard. We had the sweetest family of wrens right outside my sewing room. They flew the nest on Saturday and I hated to see them go. The parents were so attentive and brought such tasty morsels to the little ones. It is no surprise they grew so quickly and flew on. The baby orioles will soon be appearing at the feeders with their parents. They are always fun to watch as well. They are perhaps the most colorful birds that we get in our area. I would love to have cardinals, but we don't have the white snow that always makes them so stunning in pictures. 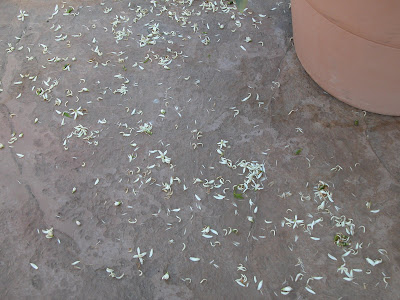 This is California snow.....spent blossoms from the citrus trees. 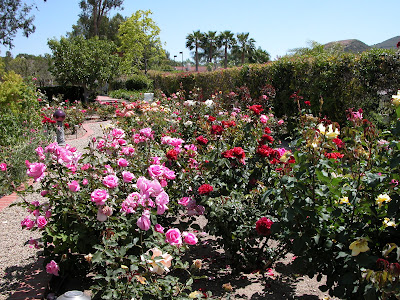 The roses in full bloom.

I hope that everyone has a wonderful week ahead. I may get behind in my blogging again depending on how things work out here. I will try to do my best to keep in touch, but please be patient if I am not.
Posted by Needled Mom at 9:11 AM 30 comments:

Do you ever sit down to write and have no idea about where to begin? This is where I am finding myself right now. It is hard to catch up on almost two months of blogging in one post.
A few days after my last post on March 2nd my life became very busy. My mother was readmitted to the hospital for several weeks because the infection within her hip flared up again. Most of my days were spent with her as that was what was important at that time. When she was discharged she came to stay with us while her treatments continued. At the time of discharge she was still receiving IV antibiotics three times a day. Since I am a R.N. I was allowed to give them to her. Needless to say, that consumed most of our day as each IV infused over a three hour period. Last week they finally discontinued the IV antibiotics and have placed her on oral ones. Although still somewhat weakened by the whole ordeal over the last six months, she did return to her home this week. She has been such a trooper throughout and a real inspiration to all who have come in contact with her. She remains our hero in every way.

Shortly after she got out of the hospital my uncle (her brother) and my cousin came out from Iowa to spend a few days. We had such a delightful time with them. My cousin had never been here before and it had been eight years since my mother and her brother had seen each other. We hated to see them leave. 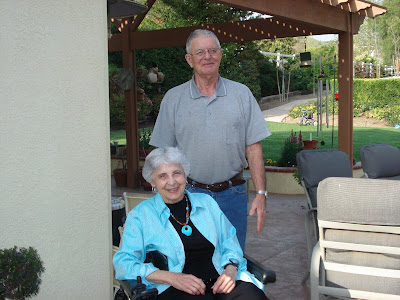 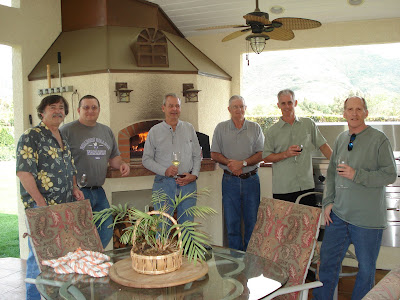 
Spring has sprung in my time away and so have a few bones in the grandchildren. We had three broken arms at the same time - two on trampoline accidents and one a klutzy move of an active two year old. The last one required surgery to put pins in the elbow. Life is never dull around here. 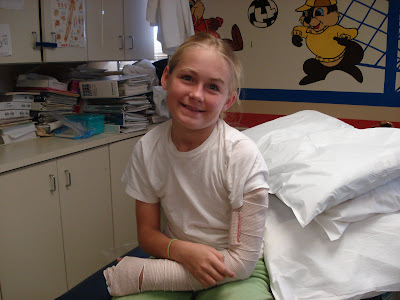 Awaiting the application of a light blue cast. 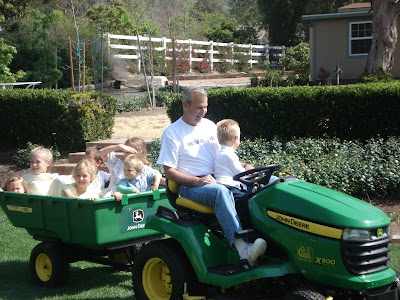 John Dee*re green cast on little on in cart, light blue cast on passenger at wheel.

Easter was delightful at our son and DIL's home. The chocolate fountain was a HUGE hit and the messy children could tell the story through pictures alone. 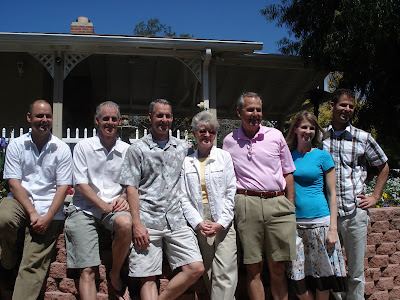 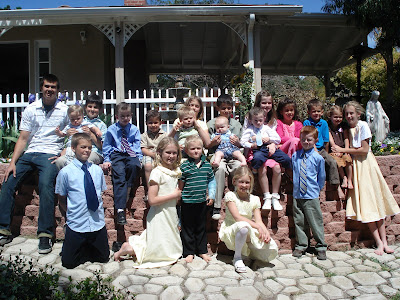 All the grandchildren together for the photo op. 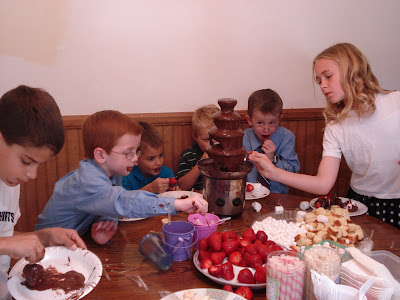 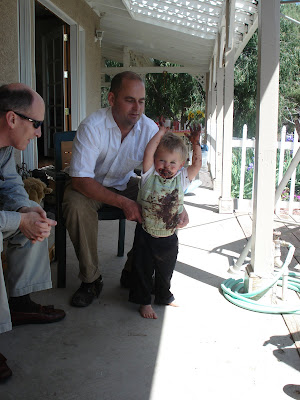 YUK!!!! Good thing the hose was close by and it was warm outside.

On Easter it was announced that this little guy is going to be a big brother in October. All are thrilled and we will be so happy to welcome our 21st grandchild on October 21st! Our 20th was also due to arrive on the 20th. I feel a pattern emerging here. 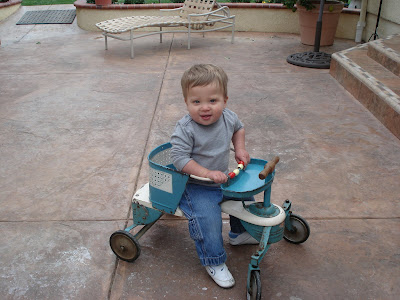 I haven't had a lot of time in my sewing room, but I did manage to get two Easter dresses made. My DIL wanted all five girls dressed in yellow dresses for Easter and was unable to find acceptable ones for two of the girls. I love sewing for children. 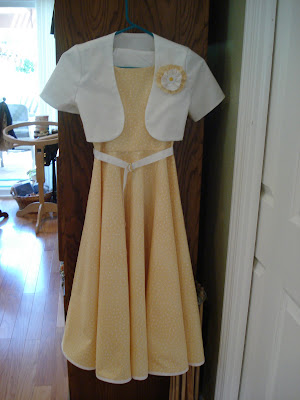 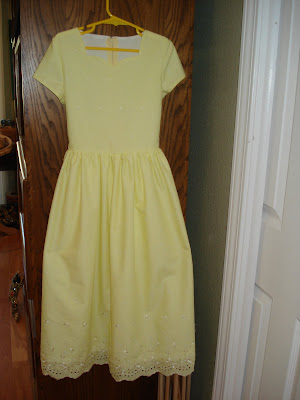 I loved the princess neckline on this little dress.


As well I have finished two of my swap puzzle pieces. The other two are WIPs and should be done soon. 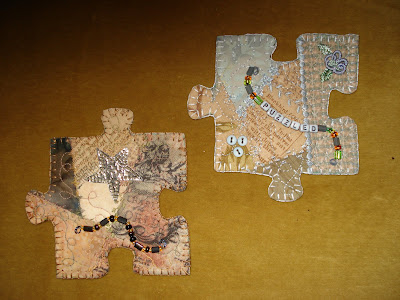 I am going to leave you with a heartwarming story. Two of our sons own a small chain of Italian restaurants. We also have a Naval base close to us and the restaurants are frequented by military men and women. One of the restaurant's more frequent customers approached my son a few months ago with a request. He wanted to pay for the meal of several servicemen who were eating dinner at the same time that he and his wife were. The gesture was greatly appreciated. It did not stop there. As he left he requested that free meals be given to each service man or woman who came in for time unknown at his expense. My son warned him that the "word" may get out and his bill could skyrocket. That made no difference to him. For the last several months each free meal is accompanied with a note of thanks for their service to our country and....the best news......it has not been abused. No one is told the name of the donor by request, but the notes of thanks have poured into the restaurant. He and his wife did, however, join us for Easter and we were able to tell him what a thrill it is to see the gratitude on the faces of those after hearing that their meals are complimentary. Humble as he is, he said that he was just grateful for all that they do for us.


I appreciate all of you who have e-mailed me and continued to hang in there while I was away. I apologize for my lack of getting to follow your posts and will, hopefully, be able to catch up on what has been going on in blogville. I have missed it so much.

Everyone must also check out this wonderful Giveaway. Talk about doing up your birthday in a BIG way!!!!