It was thirty nine years ago today that my husband and I were married. Where have the years gone? It certainly doesn't seem as though it has been that long.

We had met in high school as he was one of my older brother's friends. Since I attended an all girl school and my brother was at the all boy school, we were the primary source of each other's dates. House rules did not allow dating until we were 16 years old. My husband called me on my 16th birthday to ask for a date and I was thrilled. I always thought he was the cutest and nicest of my brothers friends. Of course at 16, aren't all boys cute? Little did I know that I would end up marrying this fine young man.

We dated for several years and then broke up for 18 months when we were both away at school. He eventually went to the Naval flight school in Pensacola. It was his first leave home at Halloween in 1968 when he came trick-or-treating to my parents home. By then we were both over 21 and he asked me to go out for a drink with him. Me?...I didn't drink...but you know that those "flyboys" knew how to toss a few beers back. As we visited and reminisced over the next couple of hours we had so much fun. Before the night was over he had said that he thought we should get married. I didn't disagree. He left after the weekend to head back to Pensacola. Many letters and phone calls were exchanged over the next few months. When he returned at Christmas we became officially engaged (after he asked my father's permission) and set a date. The rest is history.

Four sons followed in the next seven years and then we were surprised seven years later to be blessed with a daughter. Together they have continued to bless us with eleven grandsons and eight granddaughters. Number twenty is on its way with our daughter and SIL.

It has been a wonderful life and I would make the same decision all over again if given the chance. He has been a fervent religious head of our family, a loving husband, a man of great honor, a terrific father to our children, a fabulous grandfather and a caring and wonderful son to our parents. And....he's still "cute" in my eyes. 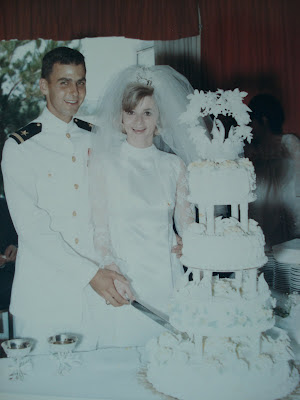 We do look young in this picture!!!! And now for the "after" shot. 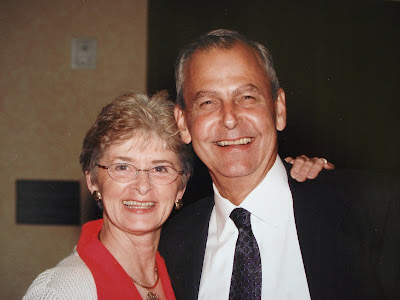 Needled Mom
So. Cal, California, United States
I go by many titles - daughter, sister, wife, mother, aunt, grandmother and friend. My husband and I have been married for 52 years and have five children. Our four sons and one daughter are all married and have blessed us with 30 grandchildren. It's a wonderful life! For 30 years I worked as a R.N. in obstetrics which included labor and delivery, nursery and NICU.