In my search to occupy my many at home hours during this endless year, I decided to do some rearranging in my studio.  In one corner I had a vintage sewing machine in a cabinet that I was using as a table.  The grandchildren have had so much fun sewing on the vintage machines lately so I decided to move it out to an area where it will see more use. This was a machine that was from my husband's family home in Stillwater, Minnesota. 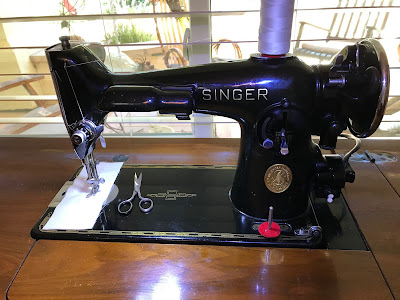 I had used it in the past, but it had been a number of years.  I read the manual, cleaned, lubricated and oiled it completely before running it.  What a great machine it is!  It's a Singer 201-2 which is called the Rolls Royce of sewing machines and thought by many to be the best vintage sewing machine ever.   It is said that it was used by Rolls Royce to sew the leather seats in their cars.  In researching it, I discovered it has a "potted" motor and Singer was so proud of its machine that it was gifted to Queen Elizabeth.  It's a heavy, solid machine, but a real beauty.  Just look at that detailed cover plate. 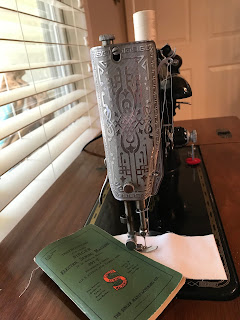 The machine runs beautifully and is known for how quietly it runs.  There is even a way to drop the feed dogs by a simple adjustment underneath the bed of the machine - quite a novel idea for back then.  It also has a drop in bobbin rather than a side loaded one.  I like the drop in bobbins much better.  The stitching is perfection, small and large, top and bobbin, through single or multiple layers. 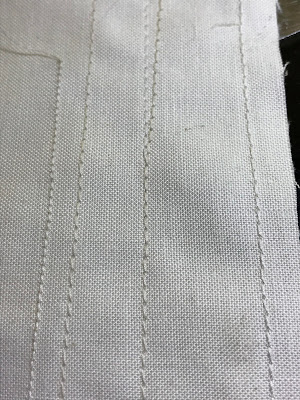 It sits in an art deco style cabinet with a stool that has storage space under the leather seat.  Inside the drawers are many different feet and attachments as well as lots of bobbins, threads, thimbles and other sewing notions.  I especially loved this package of white "best quality" thread.  Four spools for 88 cents vs. the full price of 25 cents each.  If only........ 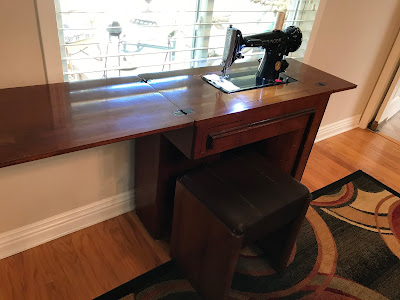 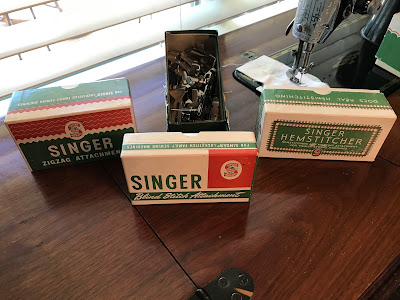 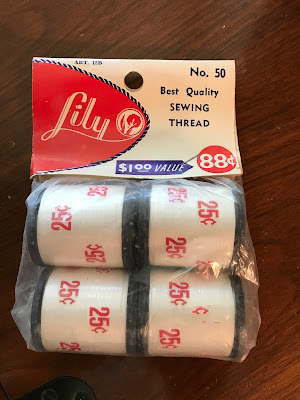 According to the serial number, this old boy will be 79 years old on July 23rd.  I've named him Sven to reflect my husband's Swedish roots and I'm sure he would have many stories to tell if he could talk.   He is a keeper and I hope we enjoy many more happy sewing years.

So what was Sven's task this week????  More masks, of course.  It looks like they will be with us for quite some time.  They might as well be stylish. 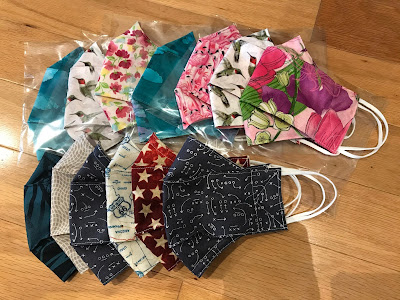 We were able to attend the First Communion of one of the grandchildren this week, followed by a nice picnic in the wine country.  There was a field of marigolds that we passed on the way that made a perfect setting for a photo. 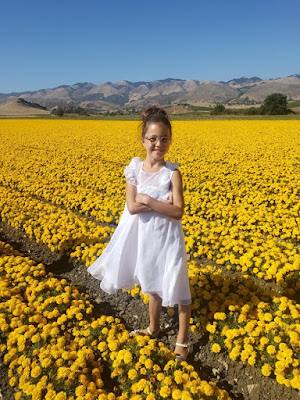 Another bit of sewing was a tooth fairy pillow for a special five year old who just lost her first tooth. 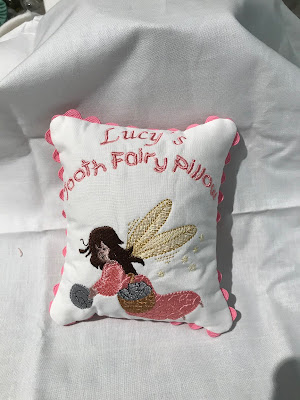 Babs was having a fabric giveaway recently and I was chosen as the winner.  Look at these pretty fabrics.  Included was a cute panel for a little stuffed Christmas angel doll that I will have to get sewn for one of the granddaughters.  Thanks, Babs. 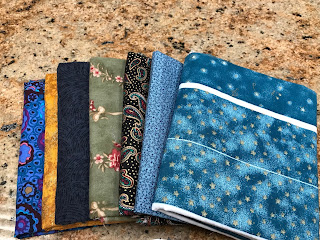 In closing, I'll leave you a photo of an orchid that just bloomed.  The colors are so pretty and I love the dark pink on the tips.  There are three blossoms on this plant. 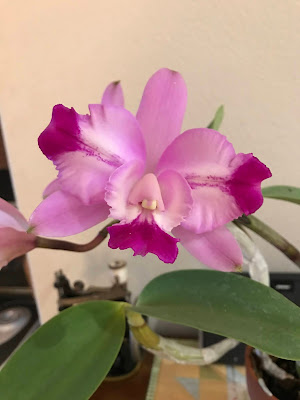 With the new Blogger I was getting some pretty disgusting comments left.  I have reverted back to old Blogger, but I have also applied comment moderation so you will not need to be offended by such comments.
Posted by Needled Mom at 1:36 PM