A very happy St. Patrick's day to all. I hope that everyone will be sporting the green so that you don't get pinched. Does anyone have any idea where that tradition came from?

Again, our weekend was filled with family and fun times. We are tremendously blessed to have so much family living so close to us.

Our youngest son, his wife and the newest grandbaby came down for the weekend. The baby is just about three months old now and has grown so much. This, of course, is a period of such rapid growth. I would just like to slow the process down a little so we have a baby for a little longer. I must say, however, that he is at a really fun age now. He is trying so hard to talk and every moving part of his little body is going until he manages to emit a sound. We had some great discussions early each morning. 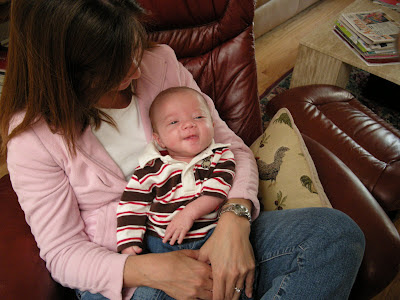 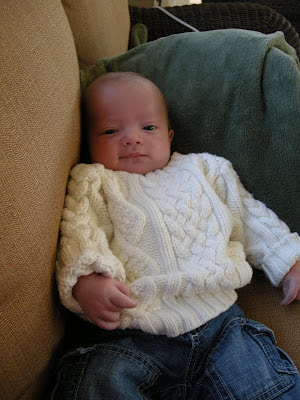 As a spur of the moment get together, we called our eldest son and DIL to see if they wanted to come for a BBQ last evening. They were thrilled to receive the invite and joined us with their four children. As I last wrote it was Rick's birthday and we had to have a "cake." Rick was never one to enjoy a cake. Even as a child he would want a pie or, his favorite, a chocolate cookie dessert. I surprised him with his favorite decorated with candles. He was even more thrilled when he found out that I had made two of the logs so he could have seconds. It is a very easy dessert to make as it is simply chocolate wafer cookies stacked with whipped cream in between, frosted with more whipped cream and chilled (or frozen) for about six hours. If you have never tried it....you should give it a go. 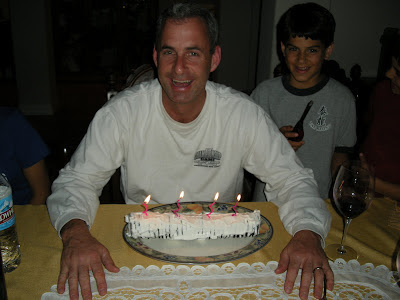 After church this morning we all went to visit my mother so she could see the baby. She loves them at this age because she can still hold them on her lap. As they grow it is much harder to try to manage them from the wheelchair. 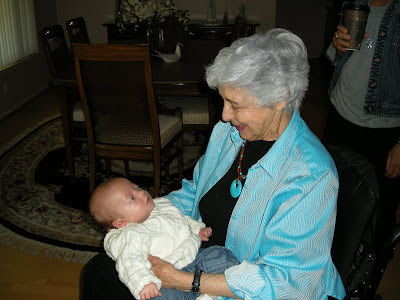 The kids left late this afternoon and I quickly changed bedding and linens to prepare for the arrival tomorrow of friends from Texas for several days. This was my husband's college roommate and groomsman in our wedding. They, however, had to cancel just a few minutes ago. It would have been very nice to see them again as it has been several years, but perhaps the timing will be better at a later date.
I am still awaiting parts for both the oven and refrigerator as well as the whirlpool tub. This "making do" is getting a little old. Hopefully, everything will be in and repaired this week -- maybe tomorrow!!!! Trying to entertain is "iffy" at best.
I do hope that everyone has a wonderful and safe week.