My Bonnie Hunter Mystery quilt is now a flimsy.  I really enjoy making a quilt this way with all the pieces sewn first and then made into blocks.  I know how bored I can get making block after block. 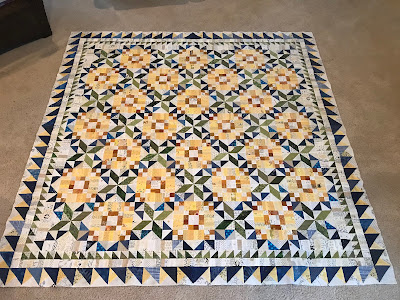 I've never been a fan of applying borders, but these were the biggest nightmare of my quilt.  I sewed my blue and neutral border on and then three of the green HST borders.  The green was on upside down, but I was fine with that.  I actually liked the corners better.  BUT......when I got to the last border, I realized that my blue borders were on wrong.  Rip, rip, rip.  Green borders off.  More rip, rip, rip.  Three blue borders off.  What's that?  Only one blue border was wrong?   Of course it was the one that I hadn't ripped off yet.  Sheesh.  How stupid can I be?  I was especially glad that I had shortened my stitch length for all those borders!!  NOT.  I finally stepped away from the machine for the day. The next day I was right back where I started the day before.  In the end the borders all fit on well, even after all of the handling.

This was when I threw it down in a heap after realizing that un-sewing would be required. 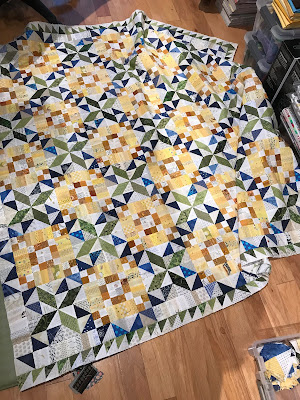 To add insult to injury, as they say, I also got my finger a bit too involved in my stitching and broke off my needle threader on my sewing machine.  I'll have to go back to the aiming game until I can get a new one. 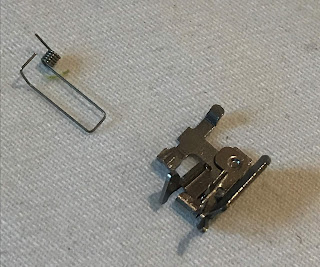 Throughout the whole ordeal, my sister (IG alaskanquilter) and I were texting with each other.  She is also doing the Good Fortune quilt.  Her version is very elegant looking in teals and reds.  It was especially nice to have a sympathetic ear during my trials.  I'm sure she saved this from becoming an UFO.

I'm still contemplating adding 6" neutral strip blocks for a final border to make it a bit larger.  It would bring it up to 84" square. It was another great pattern from Bonnie.

We've had such dark and rainy days for the last few weeks so the pictures outside will have to wait.