Some time ago I saw a pattern for a throw pillow called Coastal Cruiser.  It featured a VW "bus" and I knew that I would eventually have to make it.  If you have ever had a VW you will understand.  My first car was an aqua colored 1961 VW bug.  I named it Quaddle since the license was QDL400.  I loved that little thing and did all my own engine work on it.  Of course, that was when engines were simple and no computers were involved.  It didn't even have a gas gauge - only a lever that you kicked over to give you one extra gallon of gas when you ran out!

We still had it when we were first married, but had to sell it when we moved overseas with the Navy.  It was a sad day.

Once we returned home - with several children in tow - a new bug was not an option.  We upgraded to the "bus".  Traveling up mountainous roads was slow going, but it loved going down.  ;-)  I made cute little floral curtains for it.  Every well loved bus had curtains!!!  Our very good Navy friends also had a bus.  Theirs was orange and for years the two buses would head up to the Sierras for our annual camping/fishing trips.  Such wonderful memories!

This past week was my friends birthday and I decided it was time to make that bus for her.  Rather than doing a pillow, I resized the image to a postcard size.  These pieces were tiny!  I still think I may do a pillow sized one someday.  Maybe I will do one of a bug too. 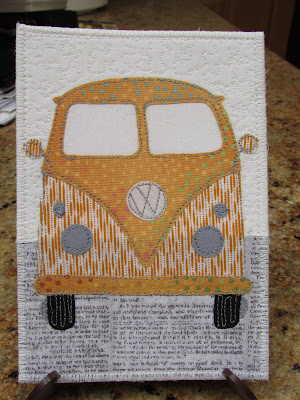 A little spring sewing also went on around here this week.  Our son and DIL always host the family Easter party.  They have a large farmhouse table and it was calling for a table runner.  This one measures at 20x60".

The egg fabric that I used is a piece that is at least 15 years old, but it worked perfectly with the colored rabbits.  The pantograph, Morning Song, is a cute spring one with flowers, birds and butterflies.  The bunny pattern is from The Objects of Design. 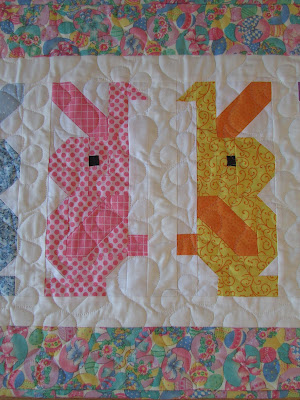 Yesterday we took two of the grandchildren to Santa Barbara to see the stage show of Peppa Pig.  It was quite cute and we had a fun time with the girls. 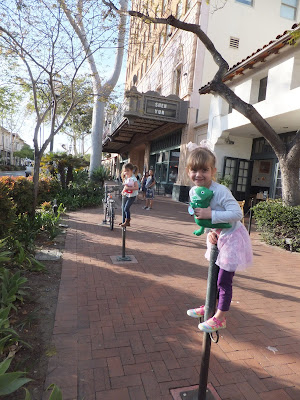 Later this week I will share photos of some amazing Clivia flowers.  We stopped by my BIL's home yesterday on the way home from church to take some pictures of his flowers.  He breeds them as a hobby.  Last time we were there he had over 3500 plants, but it is now closer to 6000!!!!  You will be amazed at some of the colors he has created with his cross pollination.  Of course, he wouldn't let me leave without helping him reduce his collection somewhat!  My gain......

Linking up with Midweek Makers this week.
Posted by Needled Mom at 8:35 AM